Why we named our daughter Aliyah Channa (plus a Chanukah story) 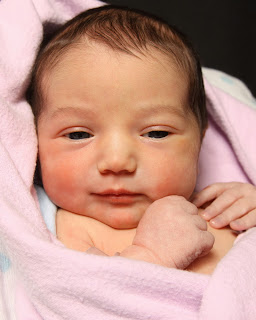 This past Tuesday, the 6th day of Chanukah and the first day of Rosh Chodesh Tevet, our daughter was born. We named her עלייה חנה (Aliyah Channa).
Channa, is for both Nitza's and my maternal grandmothers who shared that name.
Regarding the name Aliyah, it is almost self explanatory: The Hebrew word 'Aliyah' means 'to ascend' and has come to refer to the act of immigrating to Israel (though it first appears in that context already in the Mishna in Ktubot). The idea behind this term is that when one immigrates to Israel they are not merely relocating geographically, rather are ascending from a lower state of being to a higher one.
As we have done with our other children, we attempt to capture within our children's names the state of being we are in during the period of pregnancy and birth. With Matanel - gratitude to Hashem for having a child, with Edden - the return to Jerusalem and a Shabbat birth and with Ma'oz - the grounding of having our own home in Israel.
Anyone who knows Nitza and me, knows the degree to which we are dedicated to the promotion of Aliyah as a foundational aspect of being Jewish. This has been our raison d'etre of sorts for coming to Toronto and has underscored our work here. Be it by familiarizing people with Israel with anecdotes over a Shabbat meal, encouraging trips, answering questions, Israel Guidance and actively assisting people through their Aliyah process.
That is why we called our daughter Aliyah; to express our belief in the centrality of Aliyah to being Jewish as well as to solidify our own commitment of once again ascending back home to Israel.


I'd like to share with you the words (more or less) I shared with my High school Yeshiva students immediately following the naming.
"One of my strongest childhood memories is the Chanukah I spent in the hospital when I was 9. Due to frequent tonsillitis, I was scheduled to have my tonsils removed. Unfortunately, the procedure was to to take place during Chanukah at Bikur Cholim Hospital.
I say unfortunately as doing the surgery on Chanukah would mean missing out on several Chanukah activities (and foods) but more significantly, due to the hospital itself. Bikur Cholim Hospital, located smack in downtown Jerusalem, was an small, old and outdated hospital. At the time, the hospital had only 2 wards - infants and adults.
After the surgery I was sent to the adults ward for recovery. When I woke from the anesthesia I discovered that the 'adult ward' was a large hall filled with 25 beds, surrounding the perimeter the room. After a few more moments of looking around the room more carefully I realized two additional facts. The first was that I was the only child in the room. The second was that I was the only Jewish patient in the room. More specifically, the only non-Arab patient in the room.
Approximately a week earlier, the first Intifada had broken out. Though I doubt I fully understood what that meant at the time, I was non the less nervous and a bit scared of the situation I found myself in; being the only child in a room filled with 20 adult, Arab, patients. Luckily, my mother was right there beside me the whole time which definitely helped.
That evening, the rest of my family came to visit and, being Chanukah, brought a Chanukiya with them. We lit the candles, sang HaNerot HaLalu and Ma'oz Tzur just like any other Chanukah night. We weren't trying to make a spectacle of it but weren't trying to hide what we were doing, either. Everyone in the room was looking at us, or at least it felt that way. I remember that even at the time, at the age of 9, I thought it was 'cool' that we were lighting Chanukah candles under those circumstances. I remember looking around the room, wondering what the Arab patients were thinking while we sang about how, throughout history we've defeated the enemies of the Jewish People. I remember feeling proud and defiant as though to say - 'we're lighting Chanukah candles and there's nothing you can do about it!'.
In retrospect, I realize that memory encapsulates and expresses so well the unique role living in Israel plays in the life of a Jew. What is special about that night was that there was nothing special about it. It took me years to even realize it is a story worth telling. My parents are the farthest thing from the type who makes public displays of principal in order to make a point.
What was amazing about that night is that it was obvious we were going to light candles. It was obvious to us, it was obvious to the hospital staff and it was obvious to the Arab patients. Torah and Judaism are the default in Israel. You don't have to go out of your way to feel Jewish, look Jewish, act Jewish. Judaism in Israel isn't something that you do, separating and distinguishing you from the world that exists around you, rather, Judaism is the context within which everyone and everything already exists. It is not only the difference between being a majority and being a minority (though that is part of it as well). It is more about the difference between having all the communal mechanisms - national, municipal, cultural, etc... being framed by Jewish existence, followed by Jewish tradition and observance (even if partial).
That's what it means to live in the land and State of Israel in this day and age. It's the difference between being in a never ending struggle for Jewish survival and being part of the revival, rejuvenation, and flourishing of Am Yisrael and Torat Yisrael in Eretz Yisrael.
May our daughter, Aliyah, be a constant reminder to us all about what is expected of us as Jews - as well as what we we stand to gain by - ascending to Israel!"